Home>Op-Ed >Using the Power of Words to Protect Animals

Using the Power of Words to Protect Animals 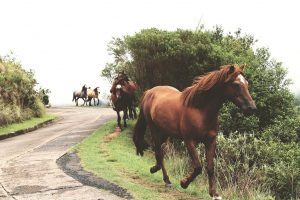 Today, society is identifying racist, sexist, homophobic, and certain other types of discriminatory phrases and eliminating them from our language. But what about words that are disrespectful of animals or even promote violence toward them? I know firsthand the influence words have and how they can be used either for good or for bad.

When I started my veterinary career nearly 20 years ago in Delhi, I served poor communities who used “tongas”, or horse-drawn carriages, for work. Most people warned me to be careful because the horse was a “shaitan” (devil) and would bite or kick me. Initially, I bought into that misguided belief, so I administered their injections and examinations using force. After all, that is how I was taught to handle animals at veterinary college.

I continued operating like this until a new mentor suggested that the term “devil” suits us humans better than it suits horses. She said, “When these animals are hitched to a cart, fitted with a painful spiked bit in their mouth, and unable to move their head to drive away the flies who are biting them and when you poke a thick needle into their butt, which is obviously very painful, what do you expect? Of course they’ll react.”

The word “devil” had predisposed me to believe that horses naturally didn’t like humans, rendering me blind to the constant abuse they endured. But, as I reflected on the power of that word, I began to realise that horses are aggressive only when they’re acting in self-defence, such as when they sense that a “human devil” (in their eyes) intends to harm them.

In English, animals are often referred to as “it”, as if they were inanimate objects. The day that I began seeing things from a horse’s perspective, I stopped calling them “it” and started calling them “he” or “she” instead. Horses and all animals are living beings who have thoughts and feelings; they are not “its” like tables and chairs, nor do they exist for human gain. I also started calling the humans using these animals their “caretakers” instead of their “owners” and asking them what their horses’ names were so as to establish respectful relationships between them. We all know that naming an animal can be an act of love and compassion, and it was delightful meeting “Shah Rukh Khan”, “Hema Malini”, “Dharmendra”, and others. I came to realise the extent to which my words influenced my views, my approach, and my actions.

The use of respectful language transformed me from an insensitive veterinarian who performed painful procedures without addressing my patients’ fear and agony into an animal welfare advocate who now advises fellow veterinarians to adopt animal-friendly practices. I became vegan and stopped consuming cows’ milk, eggs, meat, and anything else stolen from animals, and I ceased using leather, wool, and grooming and household products tested on animals. I committed myself to helping animals through the power of words, advocacy, and legislation and joined PETA India, the country’s best-known animal rights organisation.

Animals taught me that what matters is not just what we call them but also how we speak about them. For example, scientists who conduct painful experiments on monkeys and other animals only refer to them as numbers, like the prisoners they are. This is intentional because naming encourages caring, bonding, and relating. Can you imagine calling your dog “2667”? Using numbers is impersonal and makes it easier to abuse animals, which is why PETA India promotes compassionate word choice. For example, saying “animal companions” instead of “pets” reflects the true value of animals’ friendship rather than trivialising it. We also refer to dogs and cats who live on the streets and in our areas as “community animals”, not “strays” (or worse, “pariahs”), because they’re our neighbours and “community” evokes the constitutional obligation of every Indian citizen to treat animals with compassion.

Even some idioms we grew up with — like “mujhe bali ka bakra bana diya”, “kutte ki dum kabhi sidhi nahi hoti”, and “jiski laathi uski bhains” — normalise disrespect for and violence against animals. They also perpetuate speciesism, which, like sexism, racism, and other forms of discrimination, is an oppressive belief system used to justify treating animals like objects, such as research tools, food, fabric, or toys, even though they share our capacity for pain, hunger, fear, thirst, love, joy, and loneliness and value their freedom and lives as we do. PETA India’s “End Speciesism” campaign encourages everyone to use peaceful, inclusive terms, such as, “mujhe gali ka kachra bana diya”, “sooraj kabhi paschim mein nahi ugta”, and “jiski chabi uski gaadi” instead.

Mahatma Gandhiji opposed speciesism and said, “To my mind the life of a lamb is no less precious than that of a human being…. I hold that the more helpless a creature, the more entitled it is to protection by man from the cruelty of man.” I invite you to use words that protect, not disrespect, animals.