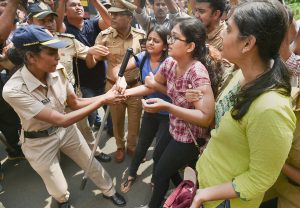 Mumbai, Oct. 5 (PTI): Police imposed section 144 of the Criminal Procedure Code in Aarey Colony and surrounding areas on Saturday, banning unlawful assembly, following strong protests by activists against the felling of trees in the green zone for a Metro car shed, an official said.

While 38 protesters were booked under various sections of the IPC since Friday night, at least 60 others were detained, police said. Shiv Sena leader Priyanka Chaturvedi, who took part in the protest, was also taken into custody.

Opposition parties slammed the ruling Sena-BJP alliance, stating they have failed to save the trees. Sena leader Aaditya Thackeray criticised the Mumbai Metro Rail Corporation Ltd for “slyly and swiftly” cutting down an ecosystem, which, he said, is “shameful and disgusting”.

He said the Metro officials should be posted in PoK to destroy terror camps, instead of trees.

The MMRCL started hacking trees from Friday night to make way for a car shed, hours after the Bombay High Court dismissed four petitions filed by NGOs and activists challenging the decision to allow felling of trees in the prime green lung of the city.

As the felling of trees began, hundreds of environmental activists gathered in Aarey Colony and protested. They tried to stop the authorities from chopping down the trees.

The activists claimed that almost 200 trees have been cut so far.

Following the protest, the entire Aarey Colony was cordoned off by Mumbai police Saturday. Police started dispersing the crowd and forcibly removed the protesters, an official said.

An activist said, “There is a heavy police deployment in the area. No one is allowed to enter Aarey Colony. Even tourists are being stopped.”

In a tweet, Sena’s Priyanka Chaturvedi said, “I have been forcibly evicted by the cops and I wasn’t even breaking the law! The cops in the car wont even tell me where I am being taken … this is insane @MumbaiPolice.”

The activists alleged that the MMRCL wants to finish the job before October 10, when the matter comes before the National Green Tribunal.

“This matter is going to be heard by the NGT on October 10, and we hope to get some respite from there. But it seems like the authorities want to eliminate the entire green patch before the hearing,” Stalin D, one of the activists, said.

Thackeray, who is contesting the October 21 assembly election from Worli, extended his support to the protesters.

“The vigour with which the Mumbai metro 3 is slyly and swiftly cutting down an ecosystem in aarey is shameful and disgusting. How about posting these officials in POK giving them charge to destroy terror camps rather than trees?” he asked.

“A project that should be executed with pride, the Metro 3, @MumbaiMetro3 has to do it in the cover of the night, with shame, slyness and heavy cop cover. The project supposed to get Mumbai clean air, is hacking down a forest with a leopard, rusty spotted cat and more,” he tweeted.

Meanwhile, opposition NCP and Congress targeted the ruling Shiv Sena and BJP, saying that the saffron parties have failed to save trees in Aarey Colony.

In a veiled dig at Thackeray, the NCP asked where the “fake environment lovers” were when the tree felling began.

“The Aarey tree felling is nothing but hitting Mumbaikars by first rendering them helpless. The @ShivSena bedeviled over the last 25 years. Now, it is holding common Mumbaikars to ransom in alliance with the BJP,” NCP chief spokesperson Nawab Malik tweeted.

“Where were fake environment lovers, who championed ban on plastic, when the tree felling started?” Malik asked on the micro-blogging site, tagging Thackeray and the BJP.

Another NCP leader, Dhananjay Munde, also condemned the “slaughtering” of trees, and accused the government of “muzzling” the voices of people.

NCP MP Supriya Sule accused the government of taking “egoistic” stance, and said it was expected of the Chief Minister’s Office to instead come forward to save the lungs of Mumbai.

“The government is taking egoistic stance about Aarey Colony tree felling. It is not right to talk about climate change on one hand and to cut down trees silently in the night on the other. @CMOMaharashtra it was expected of you to come forward to save Mumbai’s lungs by keeping aside the ego,” Sule tweeted.

The Congress asked the Shiv Sena if its alliance with the BJP was more important than saving trees.

“This is the time @ShivSena. You are in the government, can stop this. The Mahayuti (mega alliance) is more important or the mega loss of trees?” Maharashtra Congress spokesperson Sachin Sawant tweeted.

Aam Aadmi Party spokesperson Preeti Sharma Menon said cutting the trees was “a violation of the model code of conduct”.

“The order was uploaded by the Brihanmumbai Municipal Corporation only today, so it is deemed as an order today. They can’t issue such orders when the code of conduct is in place,” she told PTI.

One of the four pleas had sought that Aarey Colony be declared a forest and ecologically sensitive zone, while another petition had pleaded that it be given the status of a floodplain.