Rhythm of Love: In conversation with Kshitij Gurung

Meet DJ Kshitij Gurung, whose stage name is CJ Gurung. He’s a Nepali by origin and is happily married to a Naga Lady.

He recently moved to Nagaland after spending over a decade in Delhi.

CJ, who has been Djing since he was 15-year-old plans to continue his profession in Nagaland though he admits the earnings aren’t as good as it should be.

The DJ, who is into ‘NepHop’ genre, explains the genre as an invention of legendary rappers from Nepal who wanted a unique genre in the music industry.

CJ, who is occasionally Djing in Dimapur, also provides crash courses to those who have interests.

Read on to know more about DJ CJ.

Eastern Mirror: An intro to those who haven’t heard of you yet.

Kshitij Gurung: Hey, my name is Kshitij Gurung aka CJ by my stage name, Nepali by origin, born and bought up in New Delhi.  I have been Djing for over a decade in New Delhi Hip Hop clubbing circuit since I was 15 years old.

Eastern Mirror: How long have you been involved in the industry?

Kshitij Gurung: I have been involved in the industry for 15 years now till date.

Eastern Mirror: So, it’s been over a decade since you started your DJing journey. Has anything changed in the way you make music?

Kshitij Gurung: Yes, it has so much, When I started Djing it was all club scene oriented, now its mostly festival oriented. Back then, we would be playing pure Hip Hop/RnB/Reggaeton and  pop music. House music was also present in the scene back then but only the Uber rich would attend those gigs. Now it’s mostly EDM to be precise in India, While Hip Hop has arrived and made a huge come back in the Indian market.

Eastern Mirror: Best crowd you have ever performed for.

Kshitij Gurung: I think the best crowd I have ever performed infront of is in Nepal. Be it Kathmandu or Pokhara. People know how to party there .

Eastern Mirror: You have recently released a video in NepHop genre. Kindly explain this genre of music for those who are not familiar with it.

Kshitij Gurung: NepHop is a term invented by our legendary rappers from Nepal to make it sound more unique and have our own identity behind it. Basically NepHop is a short form for Nepali Hip Hop where we can use it in our rhymes to make sound cool. NepHop has grown over the years so much with amazing world class rappers and RnB singers straight out of Nepal. Nepali hip hop music scene or Nepali music in whole is really very Big. 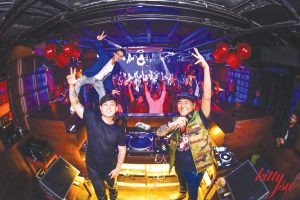 Eastern Mirror: You have been working in mainland India for most of your active years and have currently shifted to Nagaland. Why the shift?

Kshitij Gurung: Well, when you work straight 15 years, doing the same thing everyday, going to sleep in the morning and waking up in the night, it surely takes a toll on your body and your family life.

I married the love of my life who happens to be from Kohima. We were not happy with the city life and we had always dreamt of settling down in the hills for a very long time. Somehow we made it happen and opened our restaurant here in Kohima called ‘THE MIX.’

After my marriage it’s hard for me to go clubbing everynight, so, I had to give up the everyday night scene. But I still am DJing here in Dimapur in special Hip Hop events occasionally for now. Obiviously the money is not as good as compared to mainland but am happy.

Eastern Mirror: From a business perspective, what is your say on being a professional DJ?

Kshitij Gurung: Back when I started Djing, there were hardly few Djs. Now because of the Internet be it Youtube or technical advancements, anyone can become a DJ. Now-a-days there is so much competition. To be very true you can learn Djing, spend a few lakhs on learning and buying DJ equipment but to make real good money you need to stand out. To stand out I mean, you will have to master your art  and skills according to the latest trends in the market. Keep learning and yes you need a good teacher and good contacts. 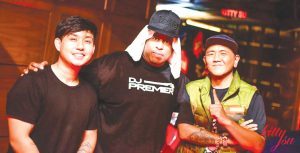 Kshitij Gurung: Yes, I had got myself a crash course in Sydney, Australia for a month when I was 14 and then took a crash course under DJ Kuber from Delhi, my mom bought me a DJ system where I practiced my skills and after that took DJ Karma as my mentor and started working with him.

Eastern Mirror: Apart from DJing do you train too?

Kshitij Gurung: Yes I do. I give out crash courses for a month.

Eastern Mirror: Are you working on any new material at the moment?

Kshitij Gurung: Yes, I am working on a song which is dedicated to Kohima with my rapper friend MACNIVIL.