Eastern Mirror Desk
Dimapur, Aug. 26: During 2017-18 the Public Health Engineering (PHE) department maintained that 50 habitations would be provided with drinking water supply. Out of it, 20% has been completed as on Jan. 2018.
As on April 2017 there were 43 habitations with better water quality while 22 habitations having water quality problems would be provided with new water supply schemes along with iron removal plants (IRP) during 2017-18.
Out of it, 64% of the work has been completed as on Jan. 2018. This was reported by the DIPR in a report that was compiled for the year 2018.

The report mentioned augmentation of water supply to Kohima town involving pumping water from the Zarü stream to a reservoir at Kigwema village, as part of a programme under the Urban Water Supply programme funded by various central govt. ministries. The ministries include Urban Development and the Development of North Eastern Region, and on a 90:10 central and state funding pattern. The design capacity of the project was 3.80 million litres daily and the physical progress was 98%.

The scheme for conservation of twin lakes namely Amok Lushi in Chuchuyimlang village and Yimdong Awantsung in Mokokchung village under Mokokchung district was ‘sanctioned’ for INR 25.83 crore by the ministry of Environment, Forests and Climate Change, under the National Lake Conservation Plan. 55% of the works have been completed, the report stated.

Projects funded by the ministry of DoNER:Water supply scheme for 24 villages of Chiephobozou under Non Lapsable Central Pool of Resources (NLCPR)
The project was intended to provide drinking water supply to one of the most water-scarce blocks in the state. The physical progress as on Feb. 2018 was 98% and completion has been rescheduled to 2017-18. 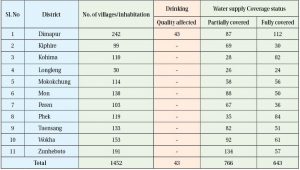