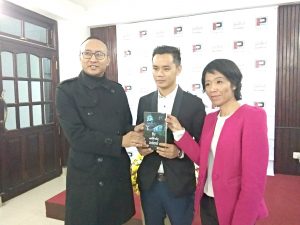 Kohima, Nov. 23 (EMN): ‘The Unlikely Indian,’ a novel written by a local writer Nzan Kikon is an exposition of the author and his friends encountering a new culture and an identity that is entirely different from where he came.

Kikon, who is a counselling psychologist by profession, spoke about how the novel came into being. The novel, he said ‘came out of his experience with other six friends (four Nagas and two non-Nagas).’  The story is about an internship experience he had. It is about culture and the fascinating experiences that the author encountered during his internship.

“When six grown men start to travel in train, it is expected that humour is present,” he said, while explaining that he tried his best to represent humour in his book. He portrayed humour in a “raw form,” the author explained.

The author had released two of his novels in a span of two years.

Advisor for IT, Science & Technology Mmhonlümo Kikon released the book. The advisor said that the novel embodies the experience of every Naga in Delhi. ‘The title itself is very unlikely,’ he said. The novel is a representation of how writers are defining their ways and their identity in more ways that one can imagine.

Speaking about cultural shock when in metropolitan places, he said people experience much, which the novel represents.  The novel also explores the topic of racism that when one puts out the topic, “You are expanding your imagination,” the advisor said.

‘Nagaland is faced with historical bias, and ‘imagination is the only thing that can challenge this historical bias,’ he said. The topic is apt because ‘we can sense the unlikely Indian. ‘Nobody is interest in us unless we tell them.’

The advisor was of the view that ‘through books like this, we will be defending our identity’ and ‘explaining our issues.’ ‘Identity matters but how you use and explain to people matter the most,’ he said. ‘We should be the one to defend and define our identity only than we will be able to put our land on map.’

An assistant professor at Kohima College Theyiesinuo Keditsu gave a review of the book. She said, “The author is man willing to sacrifice literary propriety for the sake of entertaining his readers. That makes for one unlikely but irresistible story.”

She felt that the novel follows the tradition of travel writings that ‘illustrate this transformative power of travel.’ The author, Keditsu said, has ‘created one of his most mercurial characters.’

Publisher of Penthrill, Vishü Rita Krocha congratulated the author for releasing two novels in a span of two years. It is something not easy, she said. ‘It takes a lot of discipline and dedication to write,’ she said.