Dimapur, Aug. 16 (EMN): Various organisations and schools across the state celebrated the 73rd Independence Day on August 15 by organising various activities such as visitation to patients in hospitals and charity homes with gifts and food items. School students were also reminded of the sacrifices made by the freedom fighters towards attainment of independence.

KPC: On the occasion Independence Day, members of the Kohima Press Club (KPC) visited Leprosy Hospital, Naga Bazaar, and interacted with the staff and patients. Currently there are 10 in-patients including nine men and one woman and 12 working staff.

Giving a brief status of the Leprosy Hospital, Atula, Non Medical Supervisor (NMS), said all the 10 patients have completed their treatment. She added that most of the patients have no family in Kohima and do not have contact with their relatives.

She disclosed that as rations for the patients have stopped from the government, the patients are surviving on the goodwill and benevolence of well wishers, churches and the generosity of the staff.

An inmate of the hospital said they are well taken care and happy with the treatment. He appreciated the staff for their noble services rendered to the patients and their generosity in providing with essential rations.

KPC president, Alice Yhoshü highlighted the purpose of the visit and expressed  happiness in meeting the patients and staff of the hospital. She expressed dismay to learn that ration for patients were completely stopped from the government and are surviving on the generosity of well wishers.

Yhoshü wished the patients good health and appreciated the staff for their services and urged them to continue to keep up the noble work.

KPC general secretary stated that the club had donated essential items including rice, pulses, eggs, potatoes, to the patients and staff of the hospital. 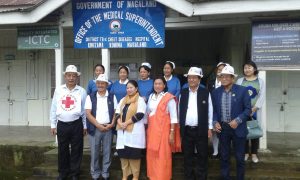 78 CRPF: The 78 Battalion CRPF at Zubza in Kohima district celebrated the Independence Day by organising variety of programmes under the leadership of its commandant, Surender Singh. The celebrations began by a ceremonial guard of honour and hoisting of national flag at the unit quarter guard.

Commandant, Surender Singh, briefed the men on the significance of the day and announced the names of President’s award recipients of  CRPF officers and men.

Surender Singh also mentioned that it is a historic moment for CRPF as a total of 72 gallantry medals were awarded to CRPF officers and personnel till date, which is highest ever since its raising.

After the flag hosting, sweets were distributed to members of unit, their families and nearby civilians.

According to a unit press release, the executive members visited the home distributed food items to the 30 odd inmates of the home. The members exhorted the inmates for better living, better learning, better worship for their own salvation.

In a press release, VWF stated that its president Niranjan Saha along with the members, teachers and children took part in various activities like painting, speeches, and cultural and patriotic performances with the aim to promote the ideas of patriotism and unity in diversity.

Pratibha is the educational wing of VWF which imparts education to the underprivileged children free of cost.

TMPS: Coinciding with the celebration of Indian Independence Day, Tzur Multi-purpose Project Society, Longjang, organised a prayer service-cum-free distribution of blanket, milk and other essential items to the senior citizens of Tzur Old Age Home in Longjang village. Around 30 senior citizens from the village were benefitted from the programme.

The school principal, Capt Prasun Basu, graced the occasion as the chief guest and hoisted the national flag. In his speech, he recalled how for over two centuries the forefathers had suffered  under the British rule for independence. He asked the cadets to be proud of being born in free India and exhorted them to strive hard and be a good human being.

Two cadets delivered speeches each in Hindi and English while the cadets of Class VII and XII sang patriotic songs.

BAN: On the occasion of Independence Day celebration, Business Association of Nagas (BAN) visited Nagaland Children’s Home Orphanage in Diphupar. BAN donated musical instruments, sports items and eatable to the orphanage and had fellowship with the children. 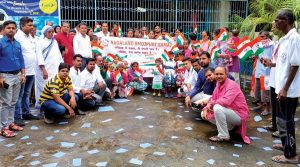 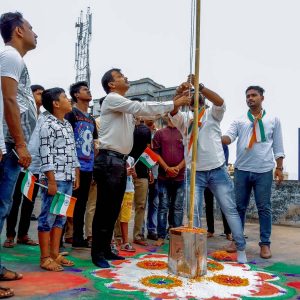 The occasion was graced by Bishnu Bhattacharjee, renowned public leader and social worker of Dimapur and adviser of DBSU. Bhattacharjee, in his address, paid tribute to  freedom fighters of northeast and undivided India for their sacrifice in bringing freedom. He also advised the students fraternity to stand united and contribute in nation building. Bhattacharjee stressed on conservation of tradition and culture. 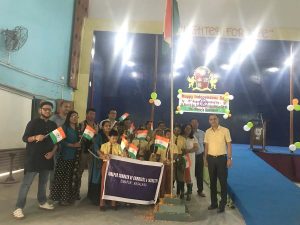 DCCI: President and members of Dimapur Chamber of Commerce and Industries celebrated the Independence Day with the students of Spastic Society at St. Mary Higher Secondary School auditorium. The president unfurled the national flag and distributed food and snacks packets to the students. 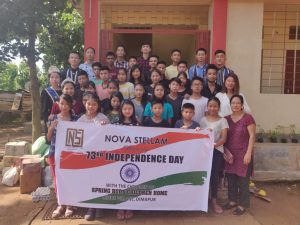 Nova Stellam: As part of the Independence Day celebration, members of Nova Stellam along with the winners of Face of Nagaland Season 4 visited Bible Believing Churches and Mission sponsored Spring Buds Children Home in Ikishe village, Dimapur, on August.

Gihutoli Khulu, Director of Nova Stellam, stated that team had fellowship with the children that was founded by Rev. Dr. Jayakumar. On the occasion, Nova Stellam team distributed food items, clothes and books.

GPPK: Gorkha Public Panchayat kohima along with GBs and executives of all Gorkha NGOs visited inmates of the State Mental Health Institute on the occasion of the 73rd Independence Day and distributed food items, blankets, bed sheets etc to the inmates.

DGC: Dimapur Government College celebrated the Independence Day in its premises where the national tricolour was hoisted by the principal, Kavili Jakhalu followed by the singing on the national anthem.

In her speech, the principal highlighted the sacrifices made by the freedom fighters to make India a democratic country. She urged the gathering to become responsible citizens and be agents of change in addressing the many ills prevalent in the society.

The celebration was attended by teaching and non-teaching staff of the college.

The team interacted with the patients and presented them with gift consisting of nutritional supplement like Horlicks, eggs, juices etc. The team also interacted with the doctors and nurses working at the hospital and extended their appreciation for the service given to the poor and needy patients. The team observed that the public/villagers should availed the facilities provided by the government through the hospital in bigger number.

PVHSS: Pranab Vidyapith Higher Secondary School celebrated the Independence Day in the school premises. The programme began with hosting of national flag by principle, vice principle and other teachers. All the students and teachers sang the national anthem.

The school principle and vice principle, in their speeches, reminded the students about the freedom struggle and sacrifices made by the freedom fighters. Singing of patriotic songs, recitation by both teachers and students marked the celebration. Yoga was also presented by the students.

NCSU president, advisor Povotso Lohe, and general secretary John Kath also exhorted the inmates of Kripa Foundation to have strong determination to overcome all forms of problems and go back home to be a better person. They also appreciated the staff of Kripa Foundation for the sacrifice towards the inmates.

There are 32 members at Kripa Foundation from within the state and also from Assam, Arunachal and Meghalaya.