Eastern Mirror Desk
Dimapur, Aug. 23: India is experiencing a major water crisis and this is posing a significant challenge, as water shortage continues to rise in towns and cities across the country. The lack of data on water is one of the key challenges driving the water crisis, according to the Composite Water Management Index (CWMI) report released by Niti Aayog on Friday.

The CWMI was established to provide information on key water indicators across the states. “This platform helps in monitoring performance, improving transparency, and encouraging competition, thereby boosting the country’s water achievements by fostering the spirit of competitive and cooperative federalism among states,” the report stated. 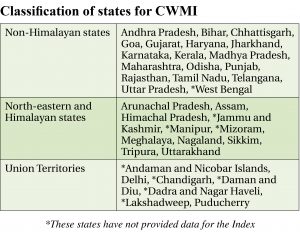 “Gujarat retained the top position for the third consecutive year with 75 points and is closely followed by Andhra Pradesh with 74 points. Himachal Pradesh regained its top spot amongst north-eastern and Himalayan states with 67 points, after slipping to the second position in FY 16-17,” it informed.

The report, however, stated that the improvement is not consistent across themes. While states and UTs demonstrated notable improvement on policy and governance, and source augmentation (groundwater) themes, there was a decline in four themes namely: source augmentation and restoration of water bodies, participatory irrigation practices, rural drinking water, and urban water supply and sanitation.

It further stated that Odisha, Bihar, Goa, Nagaland, Sikkim, Meghalaya, Assam, Tripura, and Arunachal Pradesh have declared that they have no critical or over-exploited groundwater units; and thus have not been scored for any of the indicators under the theme – source augmentation (groundwater).

The CWMI also showed that with regard to water resource management, there was “insufficient” improvement in states, which required it the most. Jharkhand, Uttar Pradesh, Odisha, Bihar, Nagaland, and Meghalaya were among the “low-performing states,” scoring less than 50 points in the index.

Nagaland, Meghalaya, Assam and Arunachal Pradesh also came under the low performing states when it came to urban supply and sanitation.

Although these states provided drinking water supply to majority of their population, with around 83% gaining access to it, wastewater treatment was a major challenge.

Among the north-eastern states, Meghalaya came under the top performing states for participatory irrigation practices (demand side management), while Nagaland along with Sikkim and Tripura, were among the bottom performers.

The report stated that these states could improve their performance by investing in-building capacity of its Water User Associations (WUAs) through adequate training and skill building workshops.

This can enable WUA to take on larger responsibilities in irrigation management practices, as well as ensure successful execution of duties.

“Deeper involvement by WUAs can also help ensure regular maintenance and proper upkeep of systems, and increase longevity of irrigation assets”, it informed.

“The results of this year’s exercise reveal an overall improvement in state performance, but severe disparities remain between states, and across themes, which must be bridged.

“Given the severity of the water crisis in India, this modest improvement falls short of what is required to address the challenges that lie ahead of us,” the report stated.