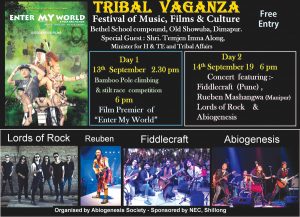 Tribal Vaganza, a festival of music, films, culture and indigenous games will be held on Sep. 13 and the 14th at Bethel School Compound, Old Showuba in Dimapur.

An update issued on Sep. 7 informed that the festival would commence with indigenous games like open oiled bamboo pole climbing competition and bamboo stilt race with a pre-release film premiere of “Enter My World.”

Minister for Minister for Higher & Technical Education and Tribal Affairs, Temjen Imna Along is said to be gracing the occasion as special invitee.

A mega concert is said to be held on day two from 6 pm onwards featuring, Fiddlecraft from Pune, Reuben Mashangwa’s band  from Manipur, Lords of Rock and Abiogenesis from Nagaland.

The festival will be organised by Abiogenesis Society, Dimapur and sponsored by North East Council, Shillong.

About “Enter My World”

Enter My World, written and directed by Arenla Subong is expected to be intriguing as it is a new form of musical with an exciting story. Calling it Howey musical, the songs are sung in Naga folk tunes (India) and the script in English. It is full of drama with all its colours – the writer and her assistant on her research venture are caught by some hunters in the jungle and  held captives in a Naga village suspecting them to be spies. They are surprised to find themselves in a world of folk era.

The end is electrifying with the tiger spirited man and the boar spirited man confronting each other and the writer and her assistant trying to flee from the village.