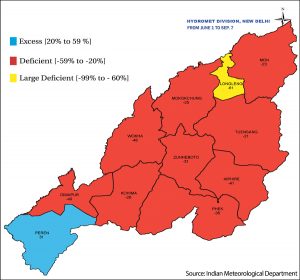 According to a report from the Customised Rainfall Information System (CRIS) under the hydromet division of IMD, between the period of June 1 to September 4, Nagaland recorded a -25% depreciation, with only 715.4 mm of actual rainfall, from the normal 953.9 mm.

Out of the eleven districts, only Peren district reported an above average rainfall with an excess of 31% between June 1 to September 7, while Longleng district witnessed the ‘largest deficient’ with 61%. The remaining nine districts received deficient rainfall. (Refer map)

Furthermore, Nagaland has been witnessing a departure from the normal rainfall pattern in the last couple of years during the monsoon season, with most districts experiencing deficient rainfall.

The CRIS report showed that several districts in Nagaland received less than the average rainfall during 2018 and 2019. Although the report indicated that there was a considerable increase in average rainfall compared to last year, the percentage of depreciation in most of the districts was quite alarming. (Refer table) 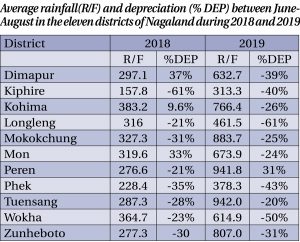 Considering that Nagaland is an agro-based economy, farmers in the state are heavily dependent on the monsoon rains for their crops to flourish. However, due to the unusual pattern of the monsoon season in the state, reports of flash floods and heavy spells of rainfall damaging paddy fields and cropping patterns from various districts have not been uncommon.

If this deviation continues, it could perhaps affect the output of agricultural produce in Nagaland, and consequently disrupt the state’s already fragile economy.