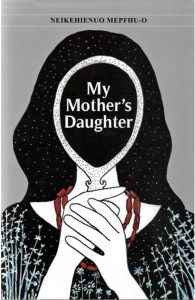 The news of the release of “My Mother’s daughter” had immediately piqued my interest, not only because of its central theme which was domestic violence, but because it was based on true accounts from women who had to bear such harrowing experiences.

Certainly, that can’t be right. Domestic violence isn’t something that ‘happens’ in Naga society. These stories are probably ‘made-up’. These stories do not ‘belong’ in our society.

Perhaps these are some initial thoughts we might have prior to reading this book. However, if we are to believe the author’s note which claim that the narrations of abuse and violence from these women( who wish not to be named) are true, then it’s time we begin to examine this issue which we have been meticulously brushing under the rug for so long.

I sat down with a piping hot cup of tea eager to read this book, hoping to unwind after a rather long day. However, any semblance of relaxation went out the window the minute I started reading the book. I tore through the pages absolutely riveted by the story, my tea cold and forgotten.

“My Mother’s Daughter” is a gripping story of women who have silently accepted abuse and domestic violence though the hands of their fathers and husbands, and have sacrificed their own “self” and worth to fulfil the role of the “perfect” wife and mother. Perhaps this story might not sit comfortably with some readers as the images of brutality and hard-heartedness is unsettling(to put it lightly) but if this book makes you angry at the quiet resignation of these women and their compliance with an existing power struggle, then that is exactly what I urge you to feel. I believe that the feeling of anger against a heteronormative power equation, unfairly tipped against women, is the beginning of an arduous fight towards gender equality. It is a gut-wrenching story full of grief yet it’s incredibly touching and tugs at the heart strings.

This patriarchal society does not tolerate violence, but behind closed doors, behind the four walls of our homes, it is acceptable for men to abuse their wives. It is acceptable for them to raise their hands, and beat them until they sink to the floor to ‘keep them in place’, to show them who’s the ‘boss’.

“You know, it is generally that somebody who can beat and control his wife is actually called a ‘man’,” one of the character’s father-in-law remarks after she confronts them about their son’s abuse. How many women must have heard similar responses from their parents, relatives and their in-laws when faced with a similar situation? Rather than confronting the accused, we demean the victim, blaming them for making him ‘angry’ or not catering to his ‘demands’ as a ‘proper’ wife should.

“Always remember that you are a woman. Just keep quiet and don’t interfere in everything,” one of the husbands in the story remarks. We are all too familiar with such deeply ingrained misogynistic attitudes towards women, reducing them to an object that merely exists to keep the sanctity of marriage in place.

And if the story reveals the sheer double standards of our society, it also shows how women, generation after generation, accept their role as the docile wife; catering to the needs of their husbands with quiet resolution and are expected to display only “feminine” characteristics.

“Lately, my daughter has become very bold in expressing herself and keeps asking a lot of questions,” the mother says with much disdain. Boldness is considered unladylike and therefore has to be curbed in order to tame her ‘wild’ spirit.

One of the nameless woman in the story also constantly apologises to her husband for his mistakes, and believes she ‘deserves’ to be hit by the husband, to be humiliated and disrespected. Are women also not indoctrinated by society, like men, to accept her role?

A daughter of a poor and broken home, another one of the nameless woman grows up believing that only “poor families fight”, only “poor families are unhappy” and only “poor families have scars and wounds on them”. She therefore studies and works hard to escape what has tormented all her life. When she finally meets a man who is “opposite” her father, and a life she had always dreamed seems within reach, her world falls apart one Christmas eve. That evening, she finds herself breathless, the result of her husband almost choking her to death. In the months and years that follow, she finds herself in the same position as her mother, one which she had always loathed her for.

“I felt like a hypocrite for blaming my mother for always enabling my father. My own words against my mother echoed in my head as I made the bed,

My face flushed in embarrassment thinking of my own words as I unquestioningly submitted to him”.

In a bleak tale of women who cannot escape the oppression of men, the author gives this character some agency. After ten long years of anger and unspeakable pain that is masked by the pretence of the perfect family, she finally makes the brave decision of leaving her husband. Although we cannot negate the experiences of the numerous women she represents and the courage required to stand up against such men, it also cannot be denied that an education and financial security were factors responsible for her making that decision. Through her bravery to speak out and break the cycle of abuse, she represents a beacon of hope to the countless women who are trapped in similar relationships. However, what about women who do not have the independence and the support required to leave an abusive marriage? Do they just comply like the woman’s mother in the novel? Don’t they have the right to express their agency as well? And can a break from such violence be afforded only to women who have the means to do so? The author leaves these questions unanswered.

In the foreword to the book written by Easterine Kire, she aptly says “With each layer that the author peels away, she helps us to understand abuse and the manner in which it sits deep inside the affected ones”.

“My Mother’s Daughter” is powerful, thought provoking, poignant yet comforting all at the same time. Neikehienuo Mepfhu-o’s writing is heartbreakingly authentic, told with much empathy and compassion, and a totally absorbing read that’s beautifully written.

Writing is one thing but to be able to get the reader to feel like they are there and part of the story is just something else. This might not be a genre you usually read but give it a chance and you will find it difficult to put this book down.