New Delhi, Nov. 24 (PTI): The Supreme Court on Sunday asked the Centre to place before it on Monday morning the letters of Maharashtra Governor Bhagat Singh Koshyari inviting Devendra Fadnavis, and of the BJP leader staking his claim to form the government in the state.

In an unprecedented hearing on a Sunday, the apex court, however, did not grant any interim relief to the Shiv Sena, NCP and Congress combine to direct the Fadnavis government to undertake floor test within 24 hours and rather said that this issue would be dealt with only after perusing the two letters on Monday.

A three-judge bench headed by Justice N V Ramana said the plea of post-poll alliance, ‘Maha Vikas Aghadi’, seeking a direction to the governor to invite them to form government under the leadership of Shiv Sena chief Uddhav Thackeray would not be considered at present.

“As adjudication of the issues and also the interim prayers sought by the petitioners to conduct floor test within 24 hours has to be considered after perusing the order of the governor as well as the letters submitted by Devendra Fadnavis even though none appeared for the state government, we request Tushar Mehta to produce those two letters by tomorrow morning at 10.30 am when the matter will be taken up, so that appropriate order will be passed,” the bench said.

Solicitor General Tushar Mehta, appearing for the Centre, told the top court that he is willing to produce the relevant record, if necessary, from the governor also.

Senior advocates Kapil Sibal, who appeared for the Shiv Sena, said that the way President’s rule was revoked in the state at 5.17 am was “bizarre” as no cabinet meeting was held and it was not clear as to on what basis the governor recommended it.

He also questioned the way Fadnavis and Ajit Pawar were sworn in as the chief minister and deputy chief minister at 8 am, saying it was “shrouded with mystery” and no documents were available in public domain as to how government was formed.

Sibal said that the combine has the majority in the 288-member assembly and Fadnavis should be asked to immediately show his strength on the floor of the house.

Senior advocate A M Singhvi, who represented the NCP and the Congress, said that the governor’s decision to invite Fadnavis to form the government was a “betrayal” and “annihilation of democracy” as 41 out of 54 elected MLAs of NCP are not with Ajit Pawar.

“On the face of it, it is not only bizarre but it suggests that the governor was acting on direct instructions. On what basis did the governor invite Fadnavis to form government? The act of governor in recommending revocation of President’s rule smacks of bias, is malafide and contrary to all the norms that have been established by the judgements of this court from time to time,” Sibal said.

Singhvi said out of 54 MLAs of the NCP, 41 members have sent a signed letter to the governor in which they clearly said that Ajit Pawar is no more in the party and the support letter given by him to Fadnavis was “illegal”.

“How on earth did Ajit Pawar become the deputy chief minister when 41 MLAs said they were with the NCP and not with Ajit Pawar? Is this not a murder of democracy,” Singhvi asked.

When Singhvi referred to earlier apex court verdicts to buttress his arguments that immediate floor test even without secret ballot was the only solution to prove majority in the house, the bench said, “Nobody is disputing that. It is a settled principle that floor test is the ultimate test.”

Mehta opposed the plea filed by the combine and said political parties do not have fundamental rights to form government and the petition should be dismissed on this ground alone.

Senior advocate Mukul Rohatgi, appearing for some BJP MLAs and two independent MLAs, questioned the maintainability of the plea and said they should have approached the Bombay High Court first instead of “disturbing” the Supreme Court on a Sunday.

He said that the governor’s decision to call a political formation to form the government is part of his discretionary power under Article 361 which is immune to judicial review.

“But the governor cannot just invite anybody,” Justice Ramana observed.

Rohatgi said no ex-parte order should be passed as there is no “tearing hurry” as the government is already in place and the petitioners must place relevant materials before the court to challenge the governor’s discretionary decision.

When bench asked Mehta who was appearing for the Maharashtra government, Fadnavis and Ajit Pawar, the solicitor general said he was appearing only for the Centre and he had got no instructions from the state.

The bench noted in its order that though the petitioners have served all the parties through e-mail, no one appeared for the state, chief minister and deputy chief minister.

In the 288-member Assembly, the BJP is the single- largest party with 105 MLAs, followed by Shiv Sena, NCP and Congress party having 56, 54 and 44 members respectively.

Following is the chronology of events in the Maharashtra government formation in which the Supreme Court on Sunday asked Solicitor General Tushar Mehta to place before it by Monday morning the letters of Maharashtra Governor recommending revocation of President’s rule in the state and inviting Devendra Fadnavis to form government. 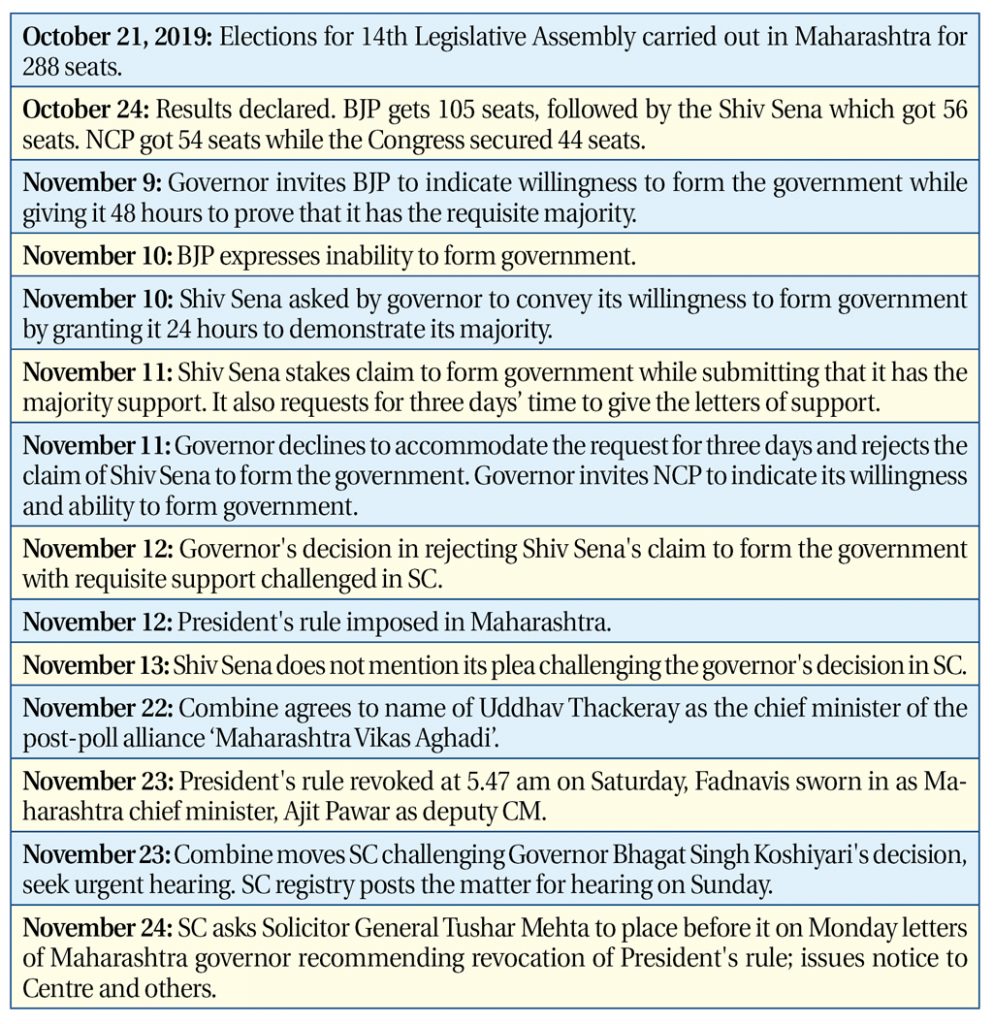