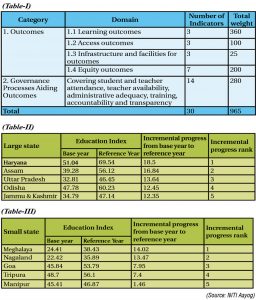 Nagaland shows improvement in overall performance with incremental progress of 13.47%

Dimapur, Sep. 30: The first edition of the School Education Quality Index (SEQI), which was developed by Niti Aayog to evaluate the performance of school education in the states and union territories (UTs) of India, was released on Monday.

According to the report, the index aims at bringing “focus to education policy by providing states and UTs with a platform to identify their strengths and weaknesses, and undertake requisite course corrections or policy interventions”.

SEQI has been established to improve the quality of school education through improvements in learning levels, access, equity, infrastructure and governance processes, the report said. It has been developed through a collaborative effort including key stakeholders such as the Ministry of Human Resource and Development, the World Bank and sector experts.

The quality of education is assessed on thirty critical indicators that “measure the overall effectiveness, quality and efficiency of the Indian school education system,” it stated. The indicators are further divided into two categories: outcomes and governance processes aiding outcomes.

The states and UTs have been grouped as large states, small states and union territories in order to “facilitate like-to-like comparisons”. It also informed that within each of these groups “the indicator values have been appropriately scaled, normalised and weighted to generate an overall performance score and ranking for each state and UT”.

The states and UTs have been ranked based on their overall performance in the reference year 2016-17, as well as on the change in their performance between the reference year and base year (2015-16). SEQI also included an analysis of each indicator under study. For instance, indicators such as average score in class 3, 5 and 8 for Language and Mathematics, transition rates from primary to upper-primary level, capturing equity in learning outcomes between general and marginalised sections of society, supply a wealth of data for future action and policy design for every state.

Among the large states, Kerala topped the overall performance list for 2016-17 with 76.63%, followed by Rajasthan (72.86%) and Karnataka(69.57%). However, in terms of indicator learning outcomes, states like Andhra Pradesh and Jharkhand made a noticeable difference in performance compared to the other large states.

Manipur was the best performing state in the group of small states with 68.76% while Tripura came in second with 64.5% and Goa, third with 58.37%. Nagaland trailed closely in fifth place with 48.65%. Chandigarh outperformed all the UTs, including Delhi, to top the overall performance list.

In terms of improvement in their overall performance, Haryana showed considerable progress in their performance from 2015-16 while Assam and Uttar Pradesh also showed noticeable improvement. (Refer table-II)

The report also indicated that Nagaland made a jump in overall performance with an incremental progress of 13.47 while Meghalaya came in first place for the most improved small state. (Refer table- III)

“Over time, the relevance of the existing indicators and the availability of data for new indicators will be factored into the index design. In particular, the linkages between policy actions and SEQI indicators will be analysed to reflect the efforts made by states and UTs to improve school education,” it informed.