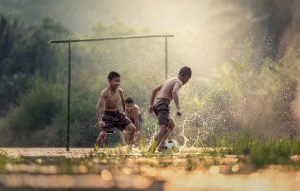 While physical inactivity among children aged 11 to 17 is widespread, Indian kids still fare better than the global average, according to a WHO study.

The research, published in the journal The Lancet Child & Adolescent Health, showed that 80 per cent of school-going adolescents globally did not meet current recommendations of at least one hour of physical activity per day — including 85 per cent of girls and 78 per cent of boys.

But compared to the global average, the level of physical inactivity was found to be lower in countries like India and Bangladesh.

At 64 per cent, the boys in the US fared even better than those in India and Bangladesh.

For girls too, the lowest levels of insufficient activity were seen in Bangladesh and India, and are potentially explained by societal factors, such as increased domestic chores in the home for girls.

Lower level of insufficient activity among boys in India may be explained by the strong focus on national sports like cricket, said the study.

The study, based on data reported by 1.6 million 11 to 17-year-old students, found that across all 146 countries studied between 2001-2016 girls were less active than boys in all but four (Tonga, Samoa, Afghanistan and Zambia).

The authors said that levels of insufficient physical activity in adolescents continue to be extremely high, compromising their current and future health.

The health benefits of a physically active lifestyle during adolescence include improved cardiorespiratory and muscular fitness, bone and cardiometabolic health, and positive effects on weight.

There is also growing evidence that physical activity has a positive impact on cognitive development and socialising. Current evidence suggests that many of these benefits continue into adulthood.

To achieve these benefits, the WHO recommends for adolescents to do moderate or vigorous physical activity for an hour or more each day.