Dimapur, Sep. 23: The Geology and Mining department has finally broken its silence on the allegation made by the Public Action Committee (PAC) under Naga Council Dimapur that it has been collecting an exorbitant amount as tax from trucks that enter the state.

Sources from the Directorate of Geology and Mining department told Eastern Mirror that it collects only INR 100 per tonne on marbles, tiles, serpentine and other decorative stones and not as claimed by the members of PAC. 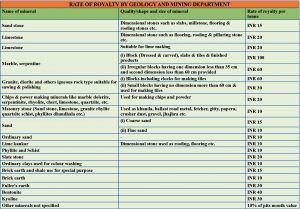 The PAC had claimed at a press conference on September 16 that “the Geology and Mining department has been collecting an amount of INR 1000-2000 per tonne on marbles and tiles.” The same was once again confirmed by the convenor of the committee to this newspaper on Monday.

Sources from the Geology and Mining department said that they collect royalty from vehicles coming from other states ranging from INR 10 to INR 100 per tonne based on the materials they carry. They said only those who transport materials illegally are penalised and not on those with valid documents like Goods and Services Tax (GST) and other tax documents. According to the rulebook, the department can charge 10 times the royalty amount for those without proper documents like GST but they are collecting only a nominal INR 300 per truck, they added.

The sources claimed that there are many trucks plying without proper documents and selling materials at an exorbitant price in the state. It added the tax collected from such trucks is credited to the state’s exchequer with receipt.

The department sources said that multi-wheeler truck that can carry 25-30 metric ton will end up paying up to INR 60,000 as tax, going by the allegation of the PAC, which they think is illogical. They went on to say that the department would take action on the defaulters if the committee can provide evidence of such illegal collection.

Another issue that the PAC has raised is collection of tax by both the Geology and Mining department and the Forest department on the items.

On this, Geology and Mining department sources said they are not infringing Article 371 (A) but working within the Nagaland Minor Mineral Concession Rules, 2004 (NMMCR 2004), framed by the state government “in exercise of the powers conferred by Section 17 of the Nagaland (Ownership and Transfer of Land and Its Resources) Act 1990, (Act No. 1 of 1993).”

They said that the department has been authorised under the Act to collect royalty and penalise those who cannot furnish valid transport challan.

They went on to say that the department of Geology and Mining and Environment, Forest and Climate Change had a joint meeting on the implementation of NMMCR 2004 at the residential office of the then chief minister TR Zeliang on October 28, 2017 in the presence of several officials, where it was decided the minerals listed in the first schedule of the Nagaland (Ownership and Transfer of Land and Its Resources) Act 1990 and schedule-1 of the NMMCR 2004 including sand, gravel and boulders would fall under the prerogative of the Geology and Mining department.

It was also decided that the department of Environment, Forest and Climate Change would take immediate steps to move for revision of Nagaland Forest Act 1968 wherever minerals, minor rocks (including limestone, laterite, mineral oils and all produce of mines and quarries) are listed as Forest produce and lay the proposed amendments before the Nagaland Legislative Assembly during the winter session of 2017.

A notification was also issued by chief secretary Temjen Toy on April 2, 2018, declaring that the department of Geology and Mining had been “authorised to grant mining lease/license, quarry permits and levy taxes/royalty on minor minerals such as; sand, gravels, boulders, stone chips, bricks, clay, sandstone etc.,” and barred other department or agency from doing the same.