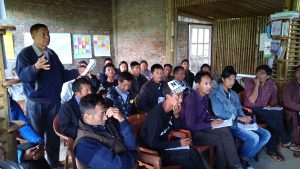 Interactions in progress during the workshop for ‘farmer producer organisations’ conducted by the NBARD from Sep. 26 to the 28th at Angangba village in Tuensang district.Dimapur, Sep. 30 (EMN): The National Bank for Agriculture and Rural Development (NBARD) conducted a workshop for ‘farmer producer organisations’ (FPO), from September 26 to the 28th, at the farmers innovation centre at Angangba village in Tuensang district.

According to a press release from the organisers, five FPOs trained in organising farmers for marketing and sales of farm produce. The FPO comprised farmers from Longkhim, Chare, Noklak, Noksen and Sangsangyu blocks.

TK Hazarika, executive director, and K Kartikeyan, COO from Ekgaon Consultancy Services were the trainers during the workshop. The Eleutheros Christian Society and Better Life Foundation, nongovernmental organisations based out of Tuensang district, have been taking the lead in creating these FPOs, informed the update.

“Once these FPOs function fully, they will be catering to about 25 villages for improving productivity, marketing and sales of agricultural produce,” the updates stated. The trainers taught thirty participants at the event on the ‘reasons and the benefits’ of “collectivised farming.”

“This movement will allow farmers to plan their crops according to market demands and harvest and process it to maximise the value of the produce,” it added.

The first two days comprised discourses about understanding concepts of FPOs, BOD and CEO roles; responsibilities and learning to make business plans and building data at an individual level, the organisers informed. The participants undertook a field visit to village-level marketing committees for interactions.

About ‘500 villagers successfully collected INR 3000 each over three years and build a share capital of INR 15 lakh.’ ‘This shows the collective strength of farmers when they organise themselves and as a community, gives their heart and soul into achieving a shared goal,’ the press release stated.