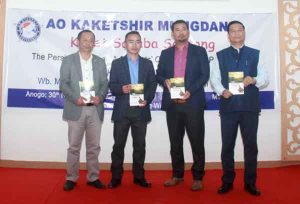 Our Correspondent
Mokokchung, Nov. 30 (EMN): A book titled, “The Persistent Voice – A Student’s quest for Self-Preservation,” was released on Saturday in Mokokchung.

The follows the “The Breach Wall,” a book based on the systematic documentation and work of the Ao Students’ Conference’s (Ao Kaketshir Mungdang) Survival Mokokchung, a movement initiated by the students’ organisation to flush out illegal Bangladeshi immigrants from Mokokchung with an aim to protect and preserve the community’s cultural identity.

The book is a project of the AKM and written by two journalists Longrangty Longchar and Aso Imsong. According to them, ‘The Breach Walls’ centred around the Survival Mokokchung Campaign within Mokokchung district and the activities of the AKM.

This edition expands the scope of the study to the entire state and even Northeast India, trying to understand the issue of illegal immigration ‘from the Ao society’s perspective using geopolitics as a prism.’

Besides reviews from different journals and books, the book has field research and interviews with academicians, veteran politicians, writers, theologians, professors, nongovernmental organisation leaders, businessmen and common people in different parts of Nagaland and the neighbouring state of Assam.

Longchar said that the book was not about discrimination or prejudice against illegal Bangladeshi immigrants but to highlight an issue that needs to be addressed.

“We are saved for now but how far we are saved is a big concern,” he said.

The book was formally released by Kohima Ao Officertem Telongjem president Meyionen Jamir. He acknowledged the job done by the AKM to tackle the influx of Illegal Bangladeshi immigrants till date and the authors for their research that went into the book to be a pathfinder for the people of Nagaland.

However, he said the battle against illegal immigration is not over ‘until were penetrate the sectors which we could touch such as core business sectors and the replacement of labour force by the local people.’

In this connection, he called upon the AKM to ponder upon the issue seriously and deliberate on it besides holding consultations to discuss such issues with representations from all the community’s sections to work out solutions.