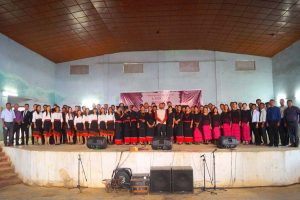 An update issued on Sep. 28 informed that three choral groups and four bands participated during the audition.

Zavekho Vero, a musician and a public leader while complimenting the vibrant entertainment for organising such a platform, is said to have emphasised briefly on fundamentals of music and study of music theory which allows one to comprehend the language of music that expresses emotion with sound.  He motivated the participants to exhibit their talents, discipline and commit for progress in future.

While adding that music is an art form and cultural activity whose medium is sound organised in time and it include common elements such as pitch, rhythm, dynamics and the sonic qualities of timber and texture etc.