Home>Arts and Entertainment >The Cars frontman Ric Ocasek passes away 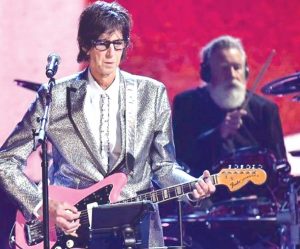 Ric Ocasek, the lead singer of the new wave rock band The Cars, has passed away. He was 75.

The rocker died here on Sunday, the New York Police Department (NYPD) said, adding that they received a call at around 4 p.m. “for an unconscious male” at a townhouse on East 19th Street, CNN reported.

Ocasek, whose identity was confirmed by the police, was pronounced dead at the scene.

The Cars became hugely popular in the late 1970s and the early 80s with hits including “My Best Friend’s Girl” and “Drive.”

The rocker married supermodel Paulina Porizkova after the two met while shooting the video for 1984’s “Drive.” The couple last year announced their separation. They share two children together.

He was known for his mop of black hair and black sunglasses, which featured in many of the band’s videos, including “You Might Think” in 1984.

Ocasek and The Cars were inducted into the Rock & Roll Hall of Fame in 2018.

“(T)he Cars were the ultimate New Wave dream machine: a hook-savvy super-charged quintet that fused 60s pop, 70s glam and avant-rock minimalism into a decade of dashboard-radio nirvana,” the band’s biography reads on the Hall of Fame website.

The band had 13 Top 40 singles and four Top 10 LPs, according to the biography.

Ocasek founded the group in 1976, the biography said.

The band broke up in 1988, but Ocasek went on to make solo albums, the biography said.