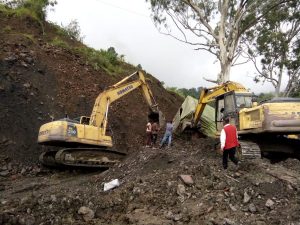 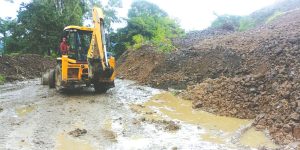 However, the affected site is unstable and will require frequent clearance. M/s Gayatri Project Ltd will be deploying machineries the entire night for any emergencies, SDO (C) of Sechü-Zubza Mhomo Tungoe told Eastern Mirror.

Around 200 metre of the road caved in after an ‘entire hill’ clamped down at around 9.30 pm on September 30, he said.

A truck was ‘partially buried’ while crossing the road; however, no casualty was reported. After retrieval of the buried truck in the afternoon, road clearance work started, Tungoe informed.

Earlier in the day, heavy vehicles were barred from plying while light vehicles were diverted via Peducha-Tsiesema road and via Mezoma-Khonoma road.

The deputy commissioner of Kohima and revenue officer were said to have inspected the affected area.