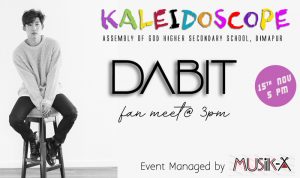 K-Pop is having a moment in Nagaland as the Hallyu (Korean wave) fascination in Nagaland is turning out to be a trend especially among youngsters.

Assembly of God Higher Secondary School (AGHSS) Dimapur is bringing the Korean singer to its school annual event dubbed as “Kaleidoscope 2019” on the theme “Dream big”.

This was informed at a press conference on Friday held at AGHSS in Dimapur by the school principal David Ngullie.

The fest was introduced in 2017 to commemorate the birthday of the founder late Rev. Dr T N Lotha. A two-day event i.e. Nov. 14-15, the fest has become an annual event and has not only become a programme for the school children but is now an anticipated event for students of other schools and well-wishers within Dimapur, Ngullie told media persons.

Kaleidoscope 2019 will be managed by Musik-A events with the K-Pop artist Dabit from South Korea headlining the fest and the AGHSS students will be performing on the jam session day. The principal said the school, on request from the students and K pop fans from Dimapur who call themselves “Sasaeng” decided to bring the K Pop artist.

The school principal and his wife Arenee Patton Ngullie said the fest was introduced to concur with the founder’s vision to bring exposure to the students of AGHSS and to motivate their talents. It is not about good musician but smart musician and this time we have gone much further by bringing K-Pop artist to encourage the children to focus on their talents and not just be confined to classroom learning, he emphasised.

“We have observed that the success of the fest has not been measured during the time of the program but after-events of the program where our alumni are now embraced well in field of music and as well as arts”, Ngullie noted.

The first day of the fest will begin with the celebration of Children’s Day and Fun Fair on Nov. 14 and followed by Jam Session (Concert) on Nov. 15, Alobo Naga informed.

In the last two years the fest have witnessed artiste like Alobo Naga an alumnus of the school, Tali Angh,  Indian Idol winner Saurabhi Debbarma, Rokovituo, Seyivenuo, Zuchobeni Tungoe and Joyphen to name a few.

Dabit whose name is David Kim pursued music from Berklee College of Music. Known by his stage name Dabit was born and raised in Ohio, USA before moving to Seoul, Korea to pursue his dream of becoming a singer-songwriter. All of his released songs are composed and produced by Dabit himself, Alobo updated.

Alobo informed that a fan meet has been organised on Nov. 15 at 3 pm and the concert with Dabit will begin at 5 pm at AGHSS in Dimapur. The fan meet tickets will be available for an amount of INR 1000 (inclusive of the concert) which will be very limited (with a capacity of 100-200) as the event is a school fest.