BJP bats for a golden Nagaland 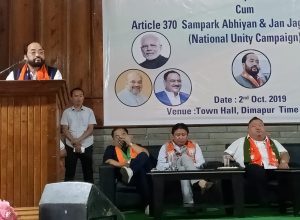 Dimapur, Oct. 2: The Bharatiya Janata Party (BJP) Nagaland state unit launched ‘Sankalp Yatra’ along with the rest of the country on October 2 at Town Hall in Dimapur to mark the 150th birth anniversary of Mahatma Gandhi.

Temjen Imna Along, state BJP president, said that the launch of Sankalp Yatra is for each and every citizen of Nagaland, and BJP Nagaland should be identified with cleanliness. “You need to have the ethos of Mahatma Gandhi and make a collective responsibility to make the state a ‘Swatch Nagaland’,” said Along.

Along, who is also the Minister of Technical and Higher Education, and Tribal affairs, believed that BJP members were setting the trend of sweeping the nation through cleanliness and were determined to make it a directive for the whole state to follow the Sankalp Yatra.

“It is our regional aspiration to make Nagaland a golden Nagaland,” he said.

While the initiative of Sankalp Yatra is focused more towards a cleanliness drive and walk, the BJP state president said it was not about how many kilometre one walks but how well the initiative is achieved. “The intention of the BJP is not to ruin Nagaland or the people but to do good for them,” Along shared.

As members of the largest political party in the world, with more than three lakh members in Nagaland alone, Along informed that BJP is the single largest party with primary members present in the state.

“The main motto of the BJP is to bring governance to the weakest strata of society and Nagas will have icons that will do great things for the people,” he said.

According to the minister, the biggest problem the country is facing is the ‘absence of knowledge which leads to corruption’ and added that the BJP is on the way to be in ‘news for good things and for the Naga people’.

Speaking about Article 370, Sampark Abhiyan and Jan Jagaran Abhiyan, the advisor for Power, Tovihoto Ayemi said that it is the responsibility of all party leaders to know what Article 370 is. “We have to reach out to the people and explain to them that Article 370 was a temporary provision,” Ayemi added.

Ayemi said that Sankalp Yatra was an initiative to propagate the teachings and values of Mahatma Gandhi which includes cleanliness, simplicity, compassion and integrity. He further acknowledged the active participation of the BJP members and urged everyone to carry out Sankalp Yatra activities in their own constituencies till January 30, 2020, which also commemorates Mahatma Gandhi’s death anniversary.

The Minister of Public Health Engineering department (PHED), Jacob Zhimomi who also spoke at the event asserted that it will work hard towards consolidating the BJP and develop a special interest for the people. “We have to take the mission forward and not become a liability for the nation,” he said.