Home>Op-Ed >A Time-Bound Delivery in Kashmir

A Time-Bound Delivery in Kashmir 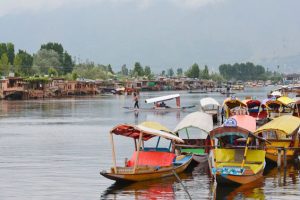 A month down the line since the state of Jammu and Kashmir, excluding Ladakh, was turned into a Union Territory for the purpose of administering it better and put in its entirety in an initial cover of prohibitory orders under Sec 144 CrPC, there is a successful advance in the calibrated opening up of the civic life on the ground and a corresponding weakening of the splintering opposition that had shown up against the Centre’s move within and outside of India. The law abiding citizens in the state had for years lived under the shadow of terrorism unleashed by the heavily armed Mujahideen infiltrated from across LoC by Pakistan, had had no perceptible gains of development from the totally corrupt governments of the Valley parties whom they successively voted for and had been made a pawn between pro-Pak separatists and a collusive state administration which did not even care to prevent civic disturbances masterminded by Pak agents in the Valley. The leadership of the Valley parties made a mockery of governance all these years ensuring neither development of the people nor their protection against Pak-sponsored violence. In a pathetic display of total lack of accountability, top leaders of the National Conference (NC) and Peoples Democratic Party (PDP) publicly stated that India should talk to Pakistan if stone pelting had to be stopped. Even the direct support given by the Centre to Mehbooba Mufti government through a coalition did not get the latter to change its pro-separatist ways and ambiguous approach on cross border terrorism.

Considering the statement of Prime Minister Modi that the change of status of J&K was temporary, the logic of why that step was taken would be that it was not a downgrade but a move by which the Centre assumed direct accountability for providing the Kashmiris with gains of development and a strong protection against violence perpetrated by a hostile neighbour — the erstwhile rulers of the state having done nothing beyond securing themselves with large posse of armed guards. Articles 370 and its product 35A were used by the state rulers to keep themselves in power in connivance with the pro-Pak lobby — there was no benefit that they brought to Kashmiris in their day to day life. A few days of comfortable life indoors for them is, in fact, helping these leaders politically. The citizens of the state looked forward to being served by the democratic dispensation at the local and central levels — they knew the issue of India talking to Pakistan lay on the turf of the national governments of the two countries. Abrogation of Article 370 was an exercise of the Constitutional power by India. The international community has upheld the move as an internal matter for this country — reaffirming the fact that the state of J&K was an integral part of India.

The questions being raised by sections of political opposition in India and some pro-Pak lobbies and human rights advocates abroad are about the nature of clampdown that exists in J&K since the abrogation of Articles 370 and 35A was announced on August 5. A primary reason for the Centre’s action was the fact that Pak-sponsored terrorism had progressively destroyed Kashmiriyat that defined the identity of the state and had made the people submit to the call of Jehadis — with a set of self-seeking politicians conniving with the adversary and ganging up with the separatists to somehow stay in power. The state administration had done precious little to identify and neutralise the growing network of Pak agents and masterminds out to destabilise the state by precipitating civic disturbances through organised stone pelting and obstructing the pursuit of infiltrated terrorists by armed forces in Intelligence based operations. A bunch of youths in the Valley — represented by the likes of Burhan Wani — had armed themselves with the supplies from Pakistan and had started taking orders directly from Maulana Hafiz Sayeed, the chief of Lashkar-e-Toiba in that country. They had to be taken down along with the infiltrated terrorists in the larger interest of the peace loving people of the state.

The apathetic administration of the state, known to be harbouring many sympathisers of Pakistan, had created a situation where without an initial clampdown the state would have been swamped by the Pak agents determined to create violence and disorder. The situation did not allow any scope for disruptive politics by the opposition in the state and justified the restraining of the Valley leaders who stood discredited for their misgovernance and corrupt ways. A lot of work had to be done to preempt the activities of separatists and Pak agents and it is quite understandable that a few days of harshness of an indoor existence would be faced by the citizens for their own good. In a fortnight the calibrated relaxation of land line communication and restoration of essential supplies and hospital services had begun and it is hoped that soon shopkeepers will open up notwithstanding a few minor disturbances created here and there by the remnants of trouble makers still operating in some lanes and Mohallas in the Valley. The administration has to show an improvement every week as far as the return to normalcy is concerned. The Supreme Court is to be appreciated for understanding the gravity of the situation in Kashmir and not giving clearance for open political activity there for the time being.

The challenge for the Centre in Kashmir is to show a demonstrable improvement in the day to day life in the Valley even as assembly of people on the street is discouraged for some more time to come. The visibility of the armed forces deployed in the state should be tempered by the showing up of civilian functionaries of the state for rendering public services. There is no reason why the Collector and SP of the district should not be seen moving together and holding restricted town hall type of interactions with the people in one area or the other. Heads of leading educational institutions should appear jointly on TV to urge the students to return to classes- assuring them of safe travel in buses. Mobile clinics should be deployed appropriately even as normalcy in hospitals was being restored. Srinagar could have been divided in zones for the purpose of providing complete security to shops on earmarked days of the week in particular areas, till such time as the markets opened completely overcoming the fear psyche that some miscreants on the prowl might have created among the people. Activation of the civic administration is the key to establishing an environ of normalcy.

For the period ahead, J&K would need a senior cool headed civilian as the Lieutenant-Governor (LG) who understands security and Intelligence, can guide and take work from the state administration instead of only receiving advice and works in close consultation with the Union Home Minister, National Security Advisor and the Army Chief. Development projects have to be speeded up and monitored. The LG of J&K should have a thorough knowledge of the nature of Islamic militancy and roots of outfits used by Pakistan for cross border terrorism and should be able to competently speak up on Kashmir in national and international forums about such matters as restoration of Kashmiriyat and the pride of place in India that Kashmir always enjoyed. India has held its case on Kashmir before the world after the abrogation of its special status and the scattered talk of alleged violation of human rights in the state by Pak lobbyists, is not catching up. What is needed is for India to demonstrate that the state is being administered from Srinagar not Delhi. The message from Kashmir should be that the state was in no danger of being overrun by outsiders even as tourism infrastructure would be developed on a grand scale and business investment boosted for the economic betterment of the people there.

The writer is a former Director Intelligence Bureau